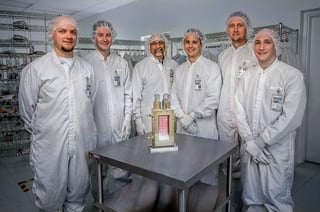 The high-energy diode pump modules provide "first light" for systems such as the HAPLS, meaning that it is the laser diodes that first convert electrical energy to optical energy; the HAPLS then amplifies that optical energy to petawatt levels via stimulated emission in a gain medium. The unique scalability of Leonardo's T6 diode arrays makes megawatt class pump modules possible. Every design decision, from the individual diode formulation and up, is driven by the goal to ensure that the T6 arrays can operate in tandem as the stackable "building blocks" of larger pump modules.

We optimize the laser diode structure, optical coatings, and emission geometry to maximize output light production and efficiency for the unique operational requirements of the end application. Individual bars can achieve an output power > 500 W with an operating efficiency of 60%.

The T6 comprises a compact 50-bar laser diode array with a bar-to-bar pitch of 380 µm. The array is hard-soldered to ensure structural and thermal integrity in extreme environments. After assembly, the emission area of the diode array is only 10 mm X 20 mm.

Micro-optics shape the output beam of every bar. Leonardo’s unique fabrication process creates the micro-optics on a single glass substrate, which is easy to align and extremely rugged. The output beam is shaped with collimation optics and conditioned to support a wide range of pump geometries.

In the case of the megawatt-class diode laser pump, we built a module comprising a 5 X 9 grid of laser diode arrays. Every array was individually addressable. A single liquid-based heat exchanger, which is set within a frame that also acts as a coolant distributor, cools the entire module. An important aspect of the cooling system is that it is not limited to using deionized water, but instead can operate with a range of cooling fluids, including simply filtered water. The module has a power density > 10 kW/cm2.

As evidenced above, Leonardo's detailed attention to scalability is the key to creating high-power laser diode pump modules from the T6 diode arrays. These high-power diode pumps then serve as the laser-within-the-laser for high-energy laser systems, such as those used for directed energy applications.

To learn more about the scalable potential of Leonardo's laser diode products, check out our T6. For further technical information about the system developed for LLNL's HAPLS, see our white paper.