One of the greatest threats to airborne platforms is that posed by Infrared Man Portable Air Defense Systems (IR MANPADS). These readily available missiles are inexpensive, highly portable and have been used lethally during the last 40 years in both military conflicts and by terrorist organizations.

MANPADS have become increasingly resistant to standard counter measure such as decoy flares and, as such, the most effective defense from MANPADS is to directly attack them with a high power, multi-band, laser DIRCM system.

To counter this threat, Leonardo, a global leader in the development, manufacture and support of airborne laser and electro-optic systems, has developed the Miysis DIRCM System which provides high power, all aspect protection against modern and legacy threats. The Miysis DIRCM System is in full production and is flying operationally.

Miysis DIRCM builds upon Leonardo’s unparalleled experience in delivering over 2500 DIRCM pointer/trackers for the protection of over 50 rotary and fixed wing platform types. The baseline is the twin-head system as a single head DIRCM does not provide the necessary level of spherical protection to defeat the advanced threat. A three-head system is also available if required for coverage on large platforms with high-value missions.

The Miysis DIRCM System has market-leading size, weight and power characteristics with no compromise of its proven self-protection jamming capability. The design utilizes the latest open architecture concepts, which allow it to be installed on an aircraft as a standalone DIRCM or integrated as part of a Defensive Aids System.

The system is small enough to be fitted to a lightweight helicopter and has the Energy-on-Target to protect a wide-bodied transport aircraft. No other DIRCM supplier delivers this level of combined, next-generation, capability in a readily-exportable package. 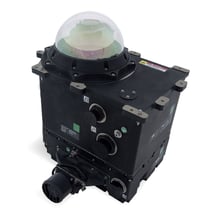