Physicists have been conducting extensive research for decades to explore the feasibility of fusion-based energy production, looking to tap what could be a trillion-dollar market with the hope of achieving the ultimate, clean, nearly inexhaustible source of energy.

While there have been significant successful trials to demonstrate fusion in a laboratory environment, the technology of viable fusion reactors with favorable energy balance always seems to be 15-30 years in the future. Recent advances in laser technology may help speed the path to viability.

The ability to create and harness a plasma at high enough temperatures and high enough densities for a long enough time to obtain fusion is the most crucial issue. Many designs and experiments have created energy through fusion, but the amount of energy used always exceeded the amount of energy created, therefore remaining under the break-even point.

There are two fundamental approaches in how to confine and ignite the fusion plasma. 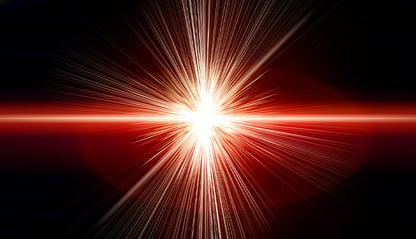 While both approaches showed some success in initiating fusion, neither succeeded in igniting the fusion burn, or in other words, not enough energy was created by the fusion reaction to self-sustain the fusion reaction until the fuel was exhausted. The main reason for this failure may be in the plasma dynamics (the development of Rayleigh-Taylor instabilities) that dissipate the compression force and prevents the plasma from becoming dense enough. Rayleigh-Taylor instabilities develop on a nanosecond timescale– the same timescale as the pulse length of most inertial confinement fusion lasers.

The advent of chirped pulse amplification (CPA) combined with high-power compact diode lasers allowed researchers to use laser pulses that are three or more orders of magnitude shorter. Additionally, such lasers can create highly accelerated ions (protons) and inject them into the plasma long before instabilities have a chance to develop2. These energetic proton beams can act as the ignitor for the fusion reaction.

Recently, organizations such as ELI Beamlines in Europe have made significant strides in advancing the operating conditions of high-energy lasers with pulse lengths in the picosecond and femtosecond regime. In a project with LLNL and Leonardo, ELI realized a successful petawatt laser system at high repetition rates using semiconductor pumps. The semiconductor lasers are an extremely efficient way to convert energy into light without the drawbacks of flashlamp-pumped systems, specifically their broad spectral output, which causes poor efficiency and parasitic heating which in turn results in an overall high heat load that makes operation at high repetition rates impossible.

One critical challenge that inertial confinement fusion systems for power generation face — once positive yield is established — is high average power to create energy at a high rate. The other critical challenge is reliability — to generate this energy consistently with minimal downtime and maintenance. Laser diode-based systems, unlike lamp-pumped ones, are very well positioned to tackle both these challenges.

Research at institutions like ELI Beamlines brings fusion energy ever closer as the progress towards picosecond and femtosecond pulse lengths at high pulse energies allow for the study of a different type of plasma physics: non-thermal, at much shorter timescales. This is a key step in advancing the feasibility of commercially viable laser-based fusion energy.